Lesya Ukrainka (Larysa Kosach-Kvitka) (1871-1913), the celebrated Ukrainian poet, made her mark on Ukrainian and world literature through her diverse writing talents. Her profound knowledge of world history and languages enabled her to write extensively across genres on a variety of subjects. In her lyrical works and dramatic poems, she vividly developed the themes of patriotism, human dignity, and personal integrity. Ukrainka’s work is timeless in its powerful assertion of human rights and freedoms. 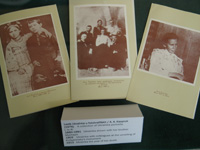 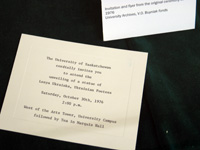 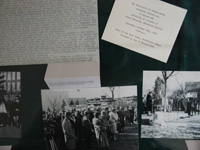 In 1976, a bronze statue of Lesya Ukrainka, made in Kyiv, Ukraine (USSR) by sculptor Halyna Kal’chenko and architect Anatoliy Ihnashchenko, was unveiled at the University of Saskatchewan. 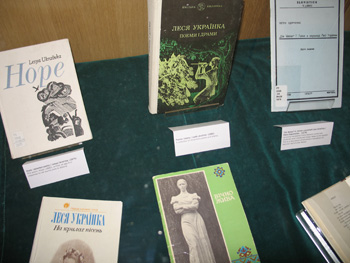 Commissioned by the Association for Cultural Relations with Ukrainians Abroad, the statue was at the time seen by some merely as Soviet propaganda designed to rehabilitate their international reputation tarnished, in part, by injustices perpetrated against the people of Ukraine. The gift was initially declined by both the Province of Saskatchewan and the City of Saskatoon before being accepted by the University of Saskatchewan and installed on campus in a grove south of the Arts Tower. Through a generous donation by Dr. Victor O. Buyniak, as well as through the support of alumni and the wider Ukrainian community, the statue was refurbished and unveiled in its present location on August 1, 2013, the centenary of the death of Lesya Ukrainka.