Welcome back! All library locations are open.

In conjunction with 2014's USSU Pride Centre's Queerapalooza!,  we highlight a few of the recent acquisitions, most of them donations, by the Neil Richards Collection of Sexual and Gender Diversity.   This special non-circulating collection at the University Archives and Special Collections (Third Floor of the Murray Library) is a treasure trove of documents and artefacts relating to the history of gender and sexual minorities, and contains a broad range of contemporary and historical materials of LGBTQ interest.  Everyone is welcome to examine and read these items in the Archives Reading Room.

Books do not always just tell a story--frequently the book itself can have a story that rivals in interest the one it contains. The circumstances of a book's publication, the controversy it inspires, and the way it challenges popular norms are all parts of the story a book carries outside of its pages. Following are some recently acquired examples of books with interesting stories from the Neil Richards Collection.

The Well of Loneliness 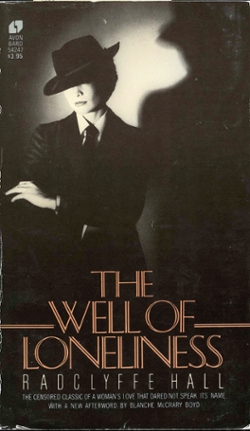 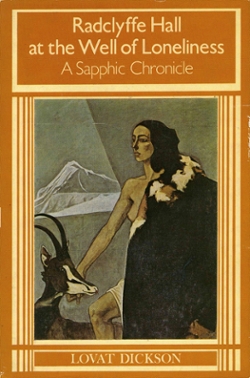 This 1928 novel by British author Radclyffe Hall, centering on the romance of lesbian characters Stephen Gordon and Mary Llewellyn, presented an at-the-time unusual sympathy for the social isolation faced by homosexuals. The book was declared obscene due to its defense of lesbianism, and faced legal challenges in Britain, Canada and in the United States. It was also heavily criticized, with James

Douglas of the Sunday Express claiming he would rather give a healthy child a “phial of prussic acid than this novel.”  Despite its initial suppression and literary short-comings, the book remained for many years the primary source of information and support for lesbians seeking some defense of their sexual preference.

The controversy surrounding the novel naturally sparked its own wave of satires. These included: The Sink of Solitude, lengthily subtitled as “being a series of satirical drawings occasioned by some recent events / performed by Beresford Egan; to which is added a preface by P.R. Stephensen, Gent, and a verse lampoon composed by several hands and now set forth for the first time, the whole very proper to be read both on family and public occasions.” This work was published also in 1928 as a humorous response to the "fuss over Miss Radclyffe Hall's novel, The Well of Loneliness" and James Douglas's article in the Sunday Express.

Lord Berners’ very rare The Girls of Radcliff Hall  was written as a lighthearted spoof of The Well of Loneliness in 1935. Although at first glance this book resembles a girl’s boarding school drama, the characters are all representations of Berners' male homosexual friends. The edition here is one of 250 copies published by Elysium Press in 2000. Two editions of The Well of Loneliness, the above shown biography of Radclyffe Hall, The Sink of Solitude and our copy of The Girls of Radcliff Hall are on display in Room 301 of the Murray Library.

The City and the Pillar 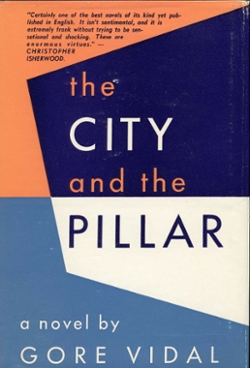 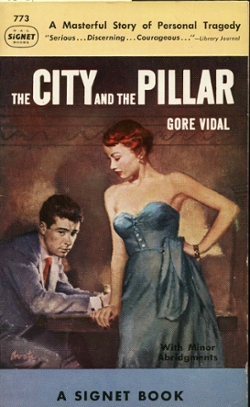 This early novel by the American author Gore Vidal is viewed as one of the most influential gay novels of the post World War II period. It was among the first books by a well-known American novelist to deal frankly with homosexuality--to show it, in fact, as acceptable behaviour at a time when it was viewed as anything but.  Because of this, there was considerable controversy and hostility directed both towards the book, and the author. Vidal had been warned by his editor that he would never be forgiven for the book, and that he would still be attacked over it well into his future. Indeed, for several years,  Vidal was blacklisted by newspapers and magazines, and had to use author pseudonyms in much of his work.

Although originally published in hardcover in 1948, The City and the Pillar did not find true success until it was republished as an inexpensive paperback in 1950. The book is unusual in that its depictions of male homosexuals frequently depart from the effeminate figure that was the norm in literature at the time. The main character, Jim, is quite masculine, a born athlete and largely well-adjusted, although sometimes aggressive in his pursuit of other men. The book is also unique for the period in that the protagonist is allowed to live, despite his open defiance of societal norms.

The Price of Salt 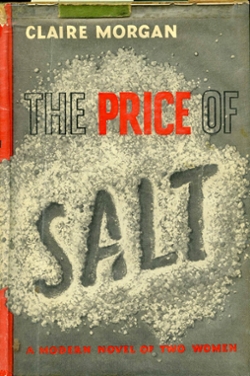 This lesbian romance was published in 1952 by Patricia Highsmith under the pseudonym of Claire Morgan. Originally published in hardcover, it was reissued as a pulp paperback that proved extremely popular among lesbians of the 1950's. The title has been reprinted by numerous feminist and lesbian presses, such as the Naiad Press, over the years, and a film adaptation is currently in the works.  The tale's ending is what made it truly stand out among gay and lesbian fiction up to that point. By this time, lesbian pulp novels had tended to fall prey to formulaic plot lines whereby the central female characters would be "cured" of their "deviant" ways, and return to a "pure" heterosexual love. Such is not the case with The Price of Salt which, while perhaps not ending with a "happily ever after" at least leaves room for a continued lesbian romance between its main characters, Theresa and Carol.

Highsmith, who later achieved fame for her psychological thrillers, including her well-known series about the amoral con-artist Tom Ripley, never publicly acknowledged her authorship of The Price of Salt until 1984, fearing the effect being associated with the book would have on her career.