February 2-6th marks this year's Aboriginal Achievement week at the University of Saskatchewan. Aboriginal Achievement week is aimed at celebrating Aboriginal accomplishments, reflecting on traditions and ceremonies, and connecting with the community. The week will involve a range of events, including a soup and bannock lunch, talks on a variety of community-related topics, art shows, and a full feast and round dance. To see the full schedule, please visit the event homepage.

In honour of Aboriginal Achievement week, the University Archives and Special Collections is hosting a small exhibit on the Ground and Third floor of the Murray Library. On the ground floor, the University's first male and female Aboriginal graduates are showcased, along with written works of various Aboriginal alumni, including influential Métis activist Howard Adams. The third floor cases include material from Allan Gonor's collection of materials relating to artist Allen Sapp, as well as a variety of Aboriginal literature. The display will be up well into February, as we continue to honour the achievements of Aboriginals in our community.

Particularly of interest are the materials relating to Edward Ahenakew, and A. M. ("Nan") McKay, the first male and female Aboriginal graduates of the University of Saskatchewan. This fascinating material, dating back to the earliest days of the University, has never before been assembled into such an exhibit. Brief biographies of each of these remarkable individuals have been provided below, with links to further information. 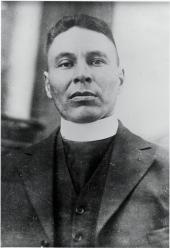 The son of Baptiste Ahenakew and Ellen Ermine Skin, Edward Ahenakew was born at Sandy Lake in 1885. His early schooling was at the Atahkakohp Day School; but in 1896, when he was 11, his father took him to boarding school in Prince Albert. A successful student and good athlete, Ahenakew graduated in 1903, and worked for some years prior to going to Wycliffe College, Toronto, to study theology. He returned to Saskatchewan, enrolling in Emmanuel College, where he was, to the best of our knowledge, the only aboriginal student at the University. He graduated and was ordained an Anglican priest in 1912. He also earned a Licentiate of Theology. The effects of the 1918 flu epidemic on the health of those on the reserves prompted him to pursue medical education at the University of Alberta, although he was forced to leave off of those studies after a couple of years due to a lack of financial aid. I 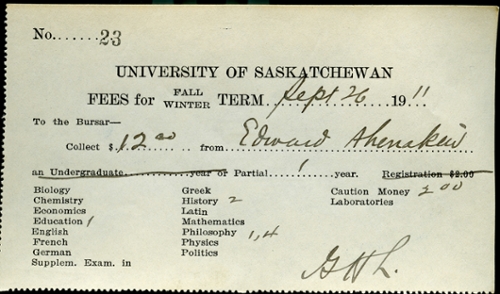 n addition to his work in communities across Saskatchewan, Edward was involved with the Indian League of Canada, and published a monthly newsletter in Cree and English; and he collaborated in the publication of a Cree-English dictionary.  Emmanuel College awarded him an honorary Doctor of Divinity. He passed away in 1961, and his book,  Voices of the Plains Cree, written by Ahenakew, was published posthumously in 1974. (photograph Saskatchewan Archives Board RB11359)


To read the full article on Edward Ahenakew, please visit his page in Aboriginal Research Resources. 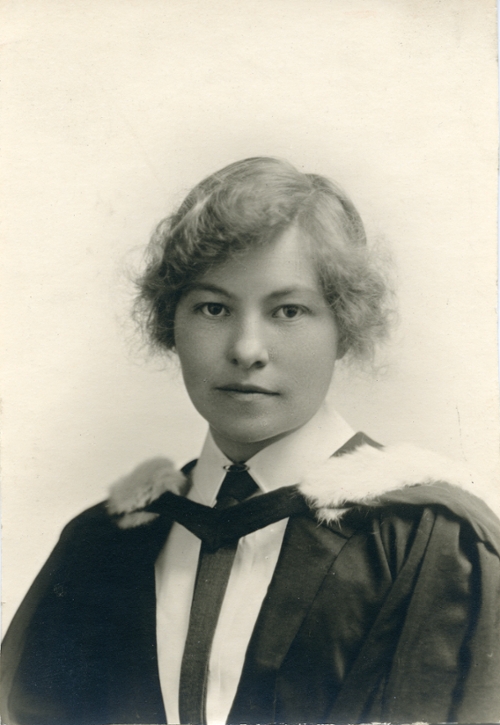 Annie Maude (“Nan”) McKay was born in 1892 at Fort a la Corne, Northwest Territories, the daughter of a Hudson Bay Company employee. She completed high school in Prince Albert where she won a scholarship to the University of Saskatchewan. At the U of S McKay took an honours course in English and French and was very active in student affairs, serving on the student council and the executives of the YWCA and Penta Kai Deka.

She was also the staff artist of The Sheaf. McKay was a member of the U of S women’s ice hockey team in 1915 and played hockey on University-affiliated teams until well into the1920s. In the ’flu epidemic of 1918 she worked as a 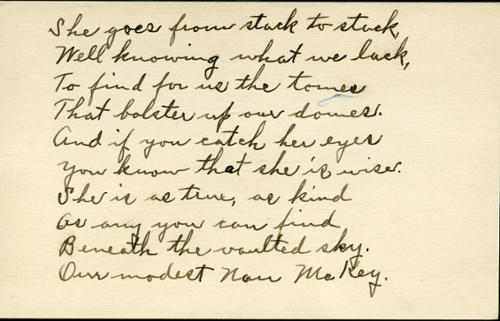 volunteer nurse (her name is painted on the stairwell in the College Building) and was chosen to unveil the plaque commemorating the undergraduate student who died in the epidemic.

When she graduated in 1915 McKay was hired as assistant librarian of the University Library, and would become the first secretary-treasurer of the University of Saskatchewan Alumni Association (established in 1917). McKay worked at theLibrary until her retirement in 1959.

To view the full article on Nan McKay and her life, please visit her page at the Aboriginal Research Resource website.