Norman Zepp and Judith Varga together have been collecting art for over 40 years.  Indeed, in 1969 while a young student at the U of S, Zepp acquired his first piece of Inuit art after having seen a small stone carving of a stone owl sitting on a shelf in professor Peter Millard’s suite. This was the beginning of a life-long commitment to the study and collecting of art, particularly that of the Inuit.  Drawing on his background in Contemporary Canadian art while Curator at the Mackenzie Art Gallery, Regina, Zepp organized several exhibitions of contemporary and historical Canadian art including Pure Vision/The Keewatin Spirit, a major touring exhibition of Inuit sculpture.  In 1994, Zepp and Varga donated 123 works of Inuit sculpture to the Mackenzie.  As Curator of Inuit art at the Art Gallery of Ontario, Zepp was instrumental in bringing several collections to the AGO including notable assemblages from George Swinton and Robert Williamson.  With the ongoing support and encouragement of his wife Judith, Zepp continues to be actively involved in the collection, study, teaching and promotion of Inuit art.

The artwork on display in this exhibition have been selected from the an assemblage of 250 works dating from the Historic period to the Contemporary with the majority from the Classic Period of Inuit Art (c.1948-1995).  Some 25 Arctic communities are represented, most often by renowned artists whose works have come to typify the style or aesthetic identified with a community or region.  The Kivalliq (Keewatin) region holds a special affinity for Zepp and it is well represented in this collection by a large number of works from Arviat by such notables as Lucy Tasseor, Luke Anowtelik, Mary Ayaq and Jacob Irkok among others.  Virtually all materials employed by Inuit artists are in evidence.  Works in stone predominate, but ivory is common as is the use of antler and bone. 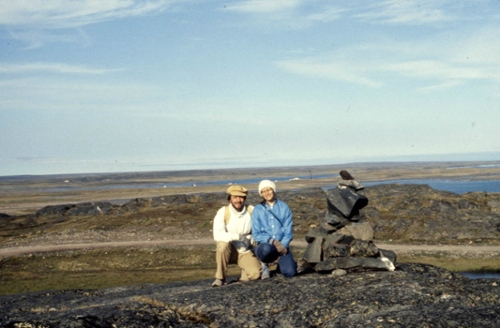 The largest area of collection focus was the choice of the caribou as a favored subject-matter.   Some 45 works are depictions of the caribou, many by the North’s finest artists.  Another aspect is a number of works from Arviat featuring beads.   The artist most known for beaded works is Eva Talooki who influenced others like Mary Tutsweetok.  The contrast of the simple unembellished grey stone of the figures, embellished by brightly coloured beads holds a special appeal to Varga.

The Zepp/Varga collection also contains a sizeable component of prints and drawings.  Baker Lake is represented by Luke Iksiktaaryuk and Luke Anguhadluk, as is Jessie Oonark and her daughter, Janet Kigusiuq.  As seen in the small but choice selection, wallhangings are much admired by the collectors.

The U of S began acquiring the art of the Inuit in the 1970’s.  The Zepp/Varga collection, with its inclusion of several works from Northern Quebec and the Central Arctic, and with its focus on the Kivalliq, the great northern plains, gives the University Collections a fairly comprehensive overview of this important aspect of Canadian art. The depth and scope of the University’s holdings of Inuit artwork will prove to be an ongoing opportunity for students and general public alike to study and enjoy.

Such opportunities are enhanced by the acquisition of  Zepp’s archives which reflects almost fifty years collecting, writing and teaching about the art and culture of the North.  Several research trips to the Arctic between 1982 and 1993 resulted in dozens of original b/w photos of the artists in their homes, often shown making their art.  Also included are hundreds of colour slides of Arctic flora and fauna, of the people living in their modern communities and hunting and fishing on the Land.

Several dozen original tapes of artist interviews have been translated and transcribed.  The artists’ voices provide particular insight into this remarkable artistic phenomenon.

Judith Varga and Norman Zepp are graduates of the University and are most grateful that the Archives and Special Collections now provides the permanent home for the art and archival material.  Their collection of art, archival papers, books and photographs were certified as having outstanding national significance by the Cultural Property Review Board, Canada.