In recognition of 2014’s Trans* Awareness Week (Friday March 28 - April 5) we present a few of the latest acquisitions “of trans* interest” in the Neil Richards Collection of Sexual and Gender Diversity at the University of Saskatchewan Archives and Special Collections.  This special non-circulating collection at the U of S Library is a treasure trove of documents relating to the history of gender and sexual minorities; everyone is welcome to examine and read these titles in the Archives Reading Room.

About this item: First edition inscribed by the author

History: Jan Morris (1926- ) is one of England’s most prolific and celebrated travel writers. Born James Morris, the author was a noted journalist, a husband and father, before travelling to Casablanca in 1972 to begin sex-changing surgery and becoming Jan Morris.  Conundrum is a memoir and meditation on this change. When it was first published the book was received with much curiosity and interest, and was chosen by the Times as one of the 100 Key Books of Our Time.

“Why not go to the Fancy Dress Ball as a Girl”, Mabel?" Postcard

History: Donald McGill (1875-1962) is the best known of all British comic postcard artists, often described as the King of the Saucy Postcard. He produced over 10,000 satiric postcards over his very long career.

Sheet Music for Coal Black Mammy, from Musical Hits from the Dumbells Revue of 1922. 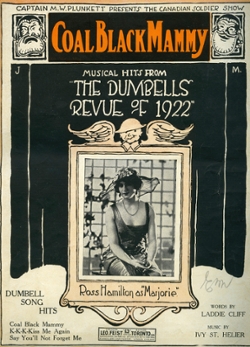 About this item: This song sheet features a photograph of the Canadian female impersonator Ross Hamilton (1889-1965), whose falsetto performances as Marjorie made him one of the audience favourites of the touring Dumbells revues.

History: The Dumbells, “the Toast of Canada”, were a variety troop composed of Canadian ex-servicemen that toured Canada and the USA from 1918 to 1932.  Originally organized in 1917 to entertain and boost the morale of Canadian soldiers near the front, the act included song and dance numbers, comic sketches, and female impersonations.

In Never Sleep Three in a Bed, a memoir of his youth in Saskatchewan, novelist Max Braithwaite described the excitement engendered by the performances of female impersonators and the particular appeal of ‘Marjorie’.

“Those were the more innocent – or perhaps the more short-sighted days. Words like "homosexual" and "transvestite" weren’t kicked around as freely as they are now. Dressing up like a woman and singing and dancing like one, was looked upon as a damned clever trick – something like sawing a female in half, or making a rabbit disappear – nothing more.”

Take a Break with UASC and the University Library