Dr. Jack Rosen, a retired veterinarian and bibliophile from London, Ontario, donated his personal collection of books and ephemera relating to the history of veterinary medicine to the University of Saskatchewan in 2004.  Dr. Rosen began collecting in the early 1970’s and continued for nearly thirty-five years. This carefully curated collection represents the history of the profession in Great Britain and North America through published works including more than 500 books, journals, newsletters, offprints, pamphlets, and clippings, and memorabilia such as family records, certificates, and awards. 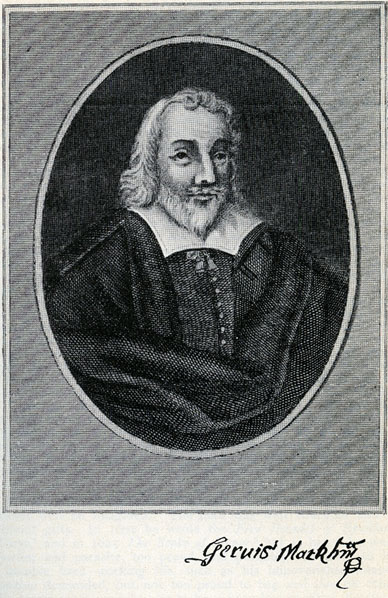 The oldest book in the collection is a 1528 printing of Libri de re rustica (The Book of Country Life), which is a collection of ancient Greek and Roman writers on agricultural subjects. The Rosen collection also provides a glimpse into the birth pangs of the profession of veterinary medicine in Canada in the form of a diploma and textbook (The Veterinary Science: the Anatomy, Diseases and Treatment of Domestic Animals) both of which were issued by a diploma mill (pictured) that operated from 1896 to 1921 in London, Ontario.

Popular veterinary literature was always in demand, so that animal owners could treat their animals, and a variety of authors obliged them with publications on veterinary topics. Some of the authors were agricultural writers, those individuals with a classical education or simply practical experience with animals: another category of medically trained persons included the surgeon turned veterinarian. Gervase Markham (pictured) was an early agricultural writer whose many volumes about health care for horses and other livestock were aimed at the lay farmer. His lack of experience with animals and his inclusion of descriptions of brutal treatments of his own devising led him to be roundly criticized by later veterinary practitioners and historians of veterinary literature. Markham’s books sold long after his death in 1637. 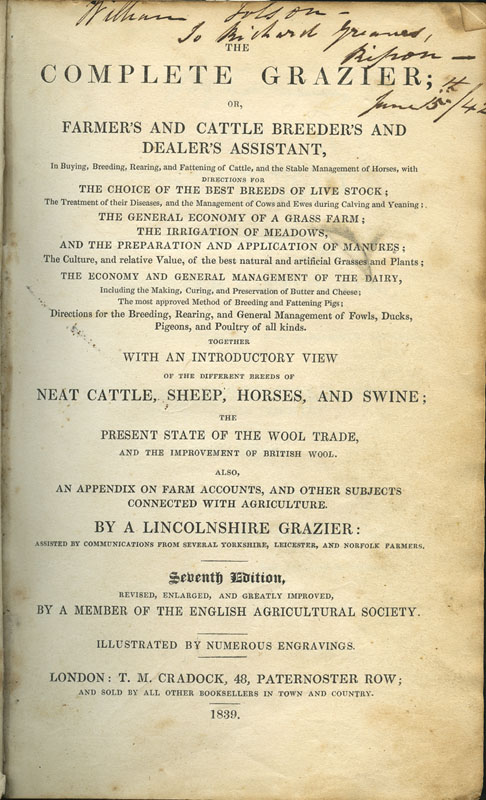 During the 18th century, more agricultural writers came to the fore with compiled and original works of uneven quality. Most did not fare well at the hands of critics, “Inasmuch as cattle practice was beneath the dignity of the farrier, and, perhaps fortunately, the cow-leeches were incapable of writing, this field is left to the domain to the agricultural writer” (Smithcors, 1957, p. 290).

The Rosen Collection contains several examples of this genre including Topham’s compendious system on cattle diseases which Smith dismisses as likely written by “… an old country physician interested in comparative medicine…” (Smith, 1976, Vol IV, p. 152).  Speaking of Skeavington’s The Modern System of Farriery, Smith (1976) noted, “This type of book appealed to the horseman, and a new one appeared periodically. The matter was always the same, a mixture of Racing, Hunting, Remarkable Performances, and Anecdotes. It did not enhance the profession” (Vol IV, p. 80). Another example of this type of work is Osbaldiston’s Large Sporting Dictionary, which includes exotic (African) and British large animals. Yet another is Thomas Horne’s The Complete Grazier, which started out with cattle as the subject and over several editions added management of fodder, manure, poultry, farm accounts and the wool trade. Horne was an English theologian and librarian.

John Lawrence and Delabere Blaine were considered to be credible authors, but both succumbed to the temptation to produce an encyclopaedic veterinary work. Lawrence, a country practitioner, wrote British Field Sports as well as being an outspoken supporter of the veterinary profession. Blaine was a surgeon-veterinarian in practice admired for his publications on the diseases of dogs who also wrote An Encyclopaedia of Rural Sports in his retirement.

I’d like to thank Dr. Jack Rosen for selecting fine materials on the history of veterinary medicine and donating his collection to the University of Saskatchewan. I would like to thank Laurie, Lisa, Amy, Stevie, Cheryl and Patrick from University Archives and Special Collections at the University of Saskatchewan for contributing their technical expertise and skill in organizing display projects to the exhibition showcasing the literature of veterinary medicine.